Danny is a dedicated comedian who only wishes to make people laugh, though most of the time his friends don't find hime that funny. He is a talented actor and he is mostly found around his best friend Doris or getting into a fight. Though he is a great friend and is always there for his friends when they need him.

He is a drama student who yearns to be a stand - up comic, but his jokes are not always that funny. Danny isn't always likeable on first impressions (Doris doesnt like Danny until the episode 'Alone in a Crowd' when they get stuck in a lift together). He is hungary for attention and affection that he is afraid to let his vunrability show and goes around with a cocky, wise-cracking, i dont need anyone attitude. He wants to make people laugh so that they will care for him, but it took him a long time to realise that people need to care about the person before they can laugh at his jokes. Danny is a naturaly talented singer and could easily outsing nearly all of his friends, but he is a natoriously arkward dancer, but he improved with every episode. He had lukimia in the episode 'Sheer Will', but recovered with the help of his friends. 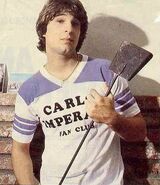 Add a photo to this gallery
Retrieved from "https://famethetvshow.fandom.com/wiki/Danny_Amatullo?oldid=3965"
Community content is available under CC-BY-SA unless otherwise noted.